Since the initial release of the sip:provider CE, version 2.1, we’ve mostly worked on two things regarding improvements towards version 2.2:

Usability of the Admin Panel, and how NOT to do it:

It seems to be a general rule for soft-switch vendors to keep the administrative panel as ugly as possible. There could be different reasons for them to do so:

It’s mostly B2B software, and users of such software are probably used to deal with bad interface design

That reason is just pure ignorance towards potential customers which are going to use your product day-by-day.

This is a valid reason to some extend. However, day-by-day operations with your platform is what you’re going to provide to your customer. It really doesn’t matter how great your backend *buzzword* storage engine is performing with your *buzzword* frontend implemented in *buzzword* programming language. What matters is how easily the regular tasks can be performed using your solution. 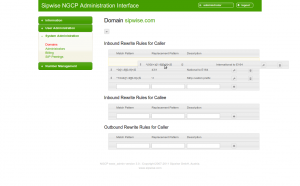 Based on our customer feedback, we’ve improved our Admin Panel quite massively, have a look at it at our Facebook Profile.

The feature which has been requested most was to provide a way for peering authentication. This is in fact not an easy task, but we’re laying grounds in the 2.2 release in order to provide this feature. We’ll introduce a new call-flow design, putting SEMS transparently in between the signaling towards your subscribers. This enables to hard-code authentication towards specific peers. We’ll work together with the SEMS developers to make the integration of peer authentication more smooth in the future, allowing to configure authentication credentials per peer in the admin panel.