We are excited to announce the general availability of the Sipwise C5CE and C5PRO mr10.5.2 release.

What is the Sipwise C5 platform? 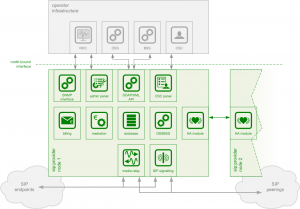 The Sipwise C5 platform is a highly versatile open source based VoIP soft-switch for ISPs and ITSPs to serve large numbers of SIP subscribers. It leverages existing building blocks like Kamailio, Sems and Asterisk to create a feature-rich and high-performance system by glueing them together in a best-practice approach and implementing missing pieces on top of it. Sipwise engineers have been working with Asterisk and Kamailio (and its predecessors SER and OpenSER) since 2004, and have roles on the management board of Kamailio and are contributing to these projects both in terms of patches and also financially by sponsoring development tasks. The Sipwise C5 platform is available as a Community Edition (CE), which is fully free and open source, and as a commercial PRO appliance shipped turn-key in a high availability setup. The Sipwise C5 provides secure and feature-rich voice and video communication to end customers (voice, video, instant messaging, presence, buddy lists, file transfer, screen sharing, remote desktop control) and connect them to other SIP-, Mobile- or traditional PSTN-networks. It can therefore act as open Skype replacement system, traditional PSTN replacement, Over-The-Top (OTT) platform and also as a Session Border Controller in front of existing VoIP services in order to enable signaling encryption, IPv6 support, fraud- and Denial-of-Service prevention. Another use-case is to act as a Class4 SIP concentrator to bundle multiple SIP peerings for other VoIP services.

The most important changes for mr10.5 compared to mr10.4 are:

See the list of all changes in PDF Changelog_mr10.5.2

Yes, the release mr10.5 is an official LTS release. It will be supported till build mr10.5.14. See the release calendar on https://www.sipwise.com/releases/.

How do I test-drive the new version?

As usual, we’re providing a VMWare Image, a Virtualbox Image and a Vagrant Box for quick evaluation testing. For those of you using Amazon Cloud we provide the EC2 AMIs in the following regions:

Check the relevant section in the Sipwise C5 CE Handbook for detailed instructions.

How do I install the new version or upgrade from an older one?

For new users, please follow the Installation Instructions in the Handbook to set up the Sipwise C5 CE mr10.5.2 from scratch. For the users of the previous version of Sipwise C5 CE, please follow the upgrade procedure outlined in the Handbook. If you have customized your configurations using customtt.tt2 files, you must migrate your changes to the new configuration files after the upgrade, otherwise, all your calls will most certainly fail. Hint: modern patchtt.tt2 framework can help you here in the future.

How can I contribute to the project?

Sipwise is publishing software components at github.com/sipwise. Please check it regularly for new projects to appear there, and feel free to fork them and send us pull requests. For development related questions, please subscribe to our Dev Mailing-List.

We want to thank our PRO/Carrier customers and the Sipwise C5 CE community for their feedback,bug reports and feature suggestions to make this release happen. We hope you enjoy using our software and keep your input coming. A big thank you also to all the developers of Kamailio, Sems and Prosody, who make it possible for us to provide an innovative and future-proof SIP/XMPP engine as the core of our platform! And last but not least a HUGE thank you to the Sipwise development team, who worked insanely hard to create this release. You are awesome!